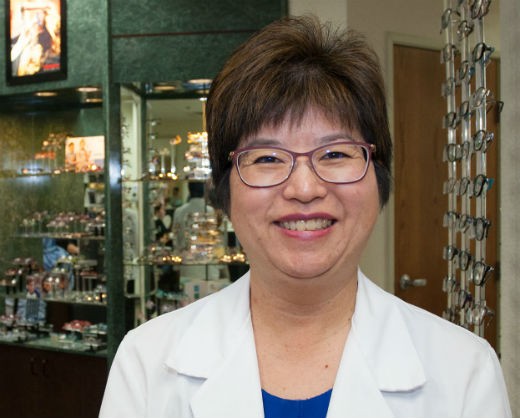 Dr. Leila Chow joined Brookside Optometric Group as an optometrist in 2002. Her favorite aspect of the job is the opportunity to help patients receive the highest level of optometric vision care, and she enjoys seeing her pediatric patients mature and grow up.

Dr. Chow studied zoology as an undergraduate at the University of California Berkeley and graduated from the UC Berkeley School of Optometry in 1990. She began her career in private practice in Antioch, but was curious about the more practical side of the optometry business. She sold part of her practice and returned to school at California State University Hayward, where she graduated with her MBA in 2001.

Dr. Chow is committed to giving back to the community, and believes that volunteerism begins at a young age. She began volunteering at age 12. As Director of Clinic Operations and Executive Director for Lions In Sight from 1999 - 2009, Dr. Chow coordinated, led and participated in hundreds of clinic missions around the world. She was instrumental in the development and implementation of a technician-training program for permanent eyecare clinics in developing nations where hundreds of volunteers have been trained. As second vice president of the Lions Eye Foundation of California­Nevada, Inc., Dr. Chow is passionate about preserving and restoring the gift of sight. The foundation provides free ophthalmic examinations, operations, and medications to the less fortunate in Northern California and the entire state of Nevada. She also served as treasurer from 2010 to 2016.

A member of the Ygnacio Valley Commuters Lion Club, she has received numerous awards for her work, including the International President’s Certificate of Appreciation, two International Leadership Medals, and the Presidential Award.

Dr. Chow also works one day a week for John Alden, MD, an ophthalmologist in Berkeley, and volunteers as a junior achievement teacher at her daughter’s school. When she’s not at the office, she enjoys reading, traveling and spending time with family and friends.