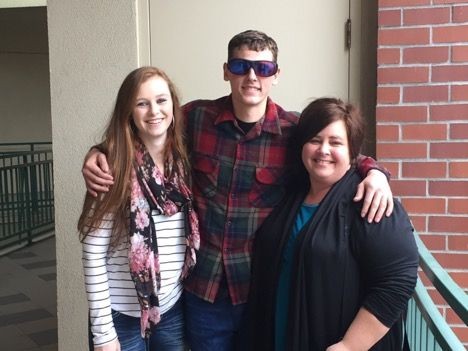 Doug with his girlfriend and Kendra

Kendra emailed us last week with a question: would we be willing to help a young man who had lost everything in the Paradise fire? Doug, the boyfriend of Kendra’s daughter, was downhearted, like all the fire victims in Paradise. Despite his personal losses, as a heavy equipment operator he will be helping to clean up the devastation his friends and neighbors have experienced as well. Doug has had poor color vision his whole life, and Kendra wanted to do something spectacular to raise his spirits.

So she and her daughter “kidnapped” Doug and brought him to Brookside Optometric Group the Friday before Christmas to see if the Enchroma color vision lenses could help him. Doug had already taken the online vision screening. Dr. Rosemary Melrose knew that he wasn’t in the highest success category but worked him into her schedule to find out.

Doug was amazed at the variety and brightness of colors. He could see his girlfriend’s red hair, he could see that a truck in the parking lot was two-tone instead of all black and that blue jeans are really blue. One more thing: Doug could see that the bricks behind him in this photo were red… he always thought bricks were green!

By special arrangement with Brookside Optometric Group, Santa gave Doug the gift of seeing color for Christmas! Merry Christmas to this entire family!